2019’s coho season was an interesting one. At first it was full of promise, having been given record predictions of coho coming into the Columbia river, optimism was running high. Abundant fish and quick limits during the ocean openers seemed to confirm what we were being promised, coho madness was on the way. By the time the Bouy 10 fishery was underway, with catches still living up to predictions, everyone was drooling over the thought of frantic chrome bullets rolling and thrashing on the other end of their lines in the tributaries. Everyone was primed and ready to twitch them out from their favorite rivers. Then, all of the sudden, the small nagging fear in the back of our minds materialized. There were early closures on the Columbia, and low counts over Bonneville Dam to start the season. For many it was disappointing and devastating. As a bankie I had been looking forward to the massive runs we were tentatively promised, and as someone who has always been an optimist, I didn’t let the bad news get me down. Despite the mediocre overall returns, I’m glad I didn’t let it get in the way of my optimism. My optimism led me to fish.

Any early attempts to find coho in September seemed as dismal as fishing had been for me the rest of the year. I heard stories of fish caught here or there and all I could seem to do was lose jigs. I hauled everything I knew to throw at them with me all month. I had twitching jigs, buzz bombs, spinners, plugs, and of course some eggs left from the only hen Springer I managed to catch this year. Having searched pretty heavily for these silver bullets at the end of September with no success, I was beginning to fear a season as poor as last year, but kept telling myself that a big push could be around the corner. Finally in early October I was on the board with my first coho of 2019. It was a chrome bright little hatchery hen. Maybe 6 lbs. Moments later I came up with my second for the year, a nice native. It felt good to finally get some action, and both came in the hour I was able to fish before work that day. 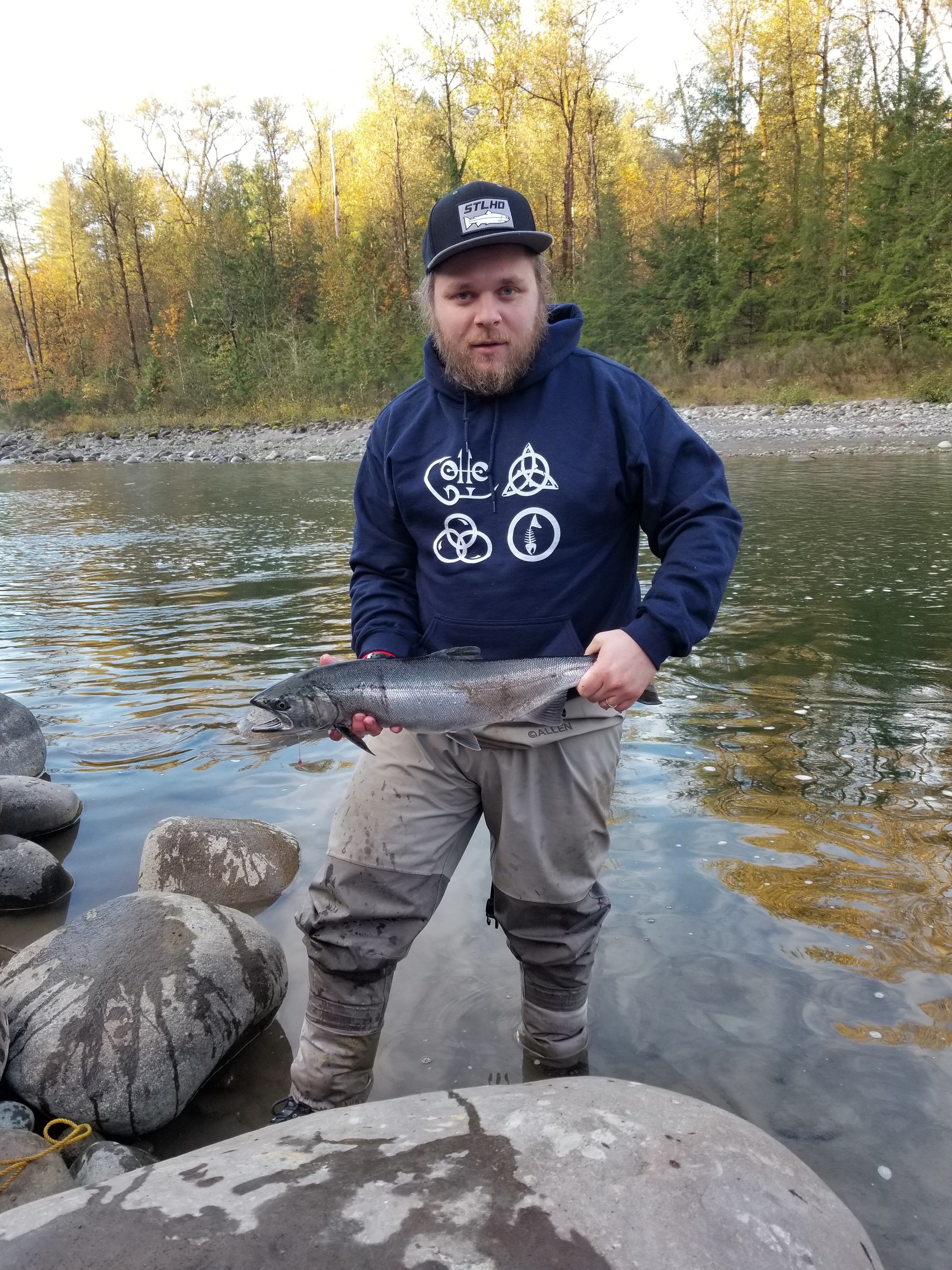 Now that I knew the fish were in I was walking that tight rope balancing home life and work, with my fishing obsession. I was sleeping less and going on short one hour trips before work, or dragging my daughter along to watch from her stroller, while I made as much time as I could for fishing. It was paying off and I seemed to be catching fish on just about every outing. I was finding a lot of chrome hens, and collecting a lot of eggs. This made me a happy guy, but still there was no motherlode invasion of coho into my river. I was still working for the fish I found, and never walked out of a hole with a limit. Fishing remained pretty consistent, then began to taper down into November. All in all I had a good season, there were many fillets and jars of eggs in my freezer when all was said and done, and I had some great new memories to carry with me. I felt content, and promised my wife I wouldn’t fish at all in December. 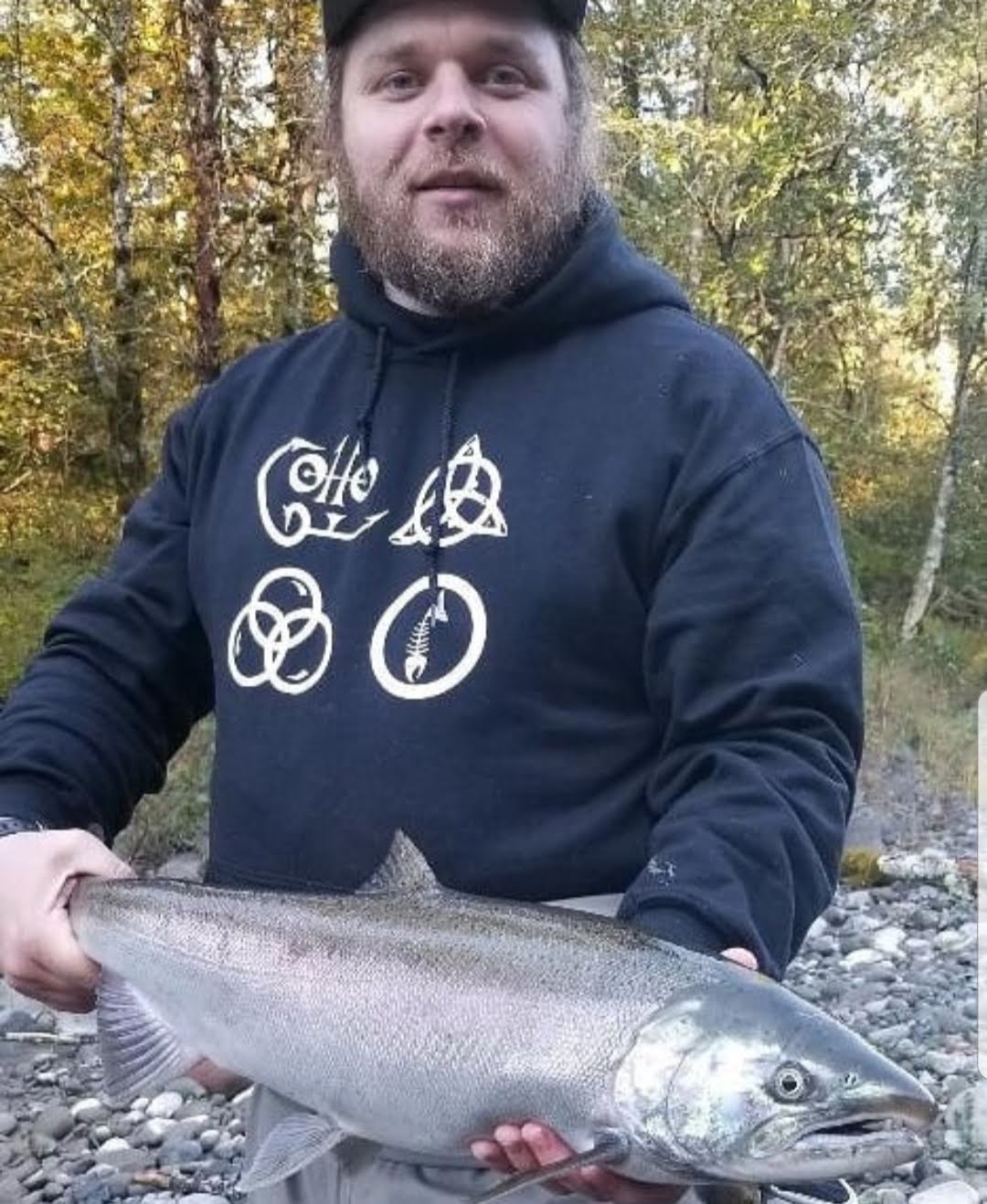 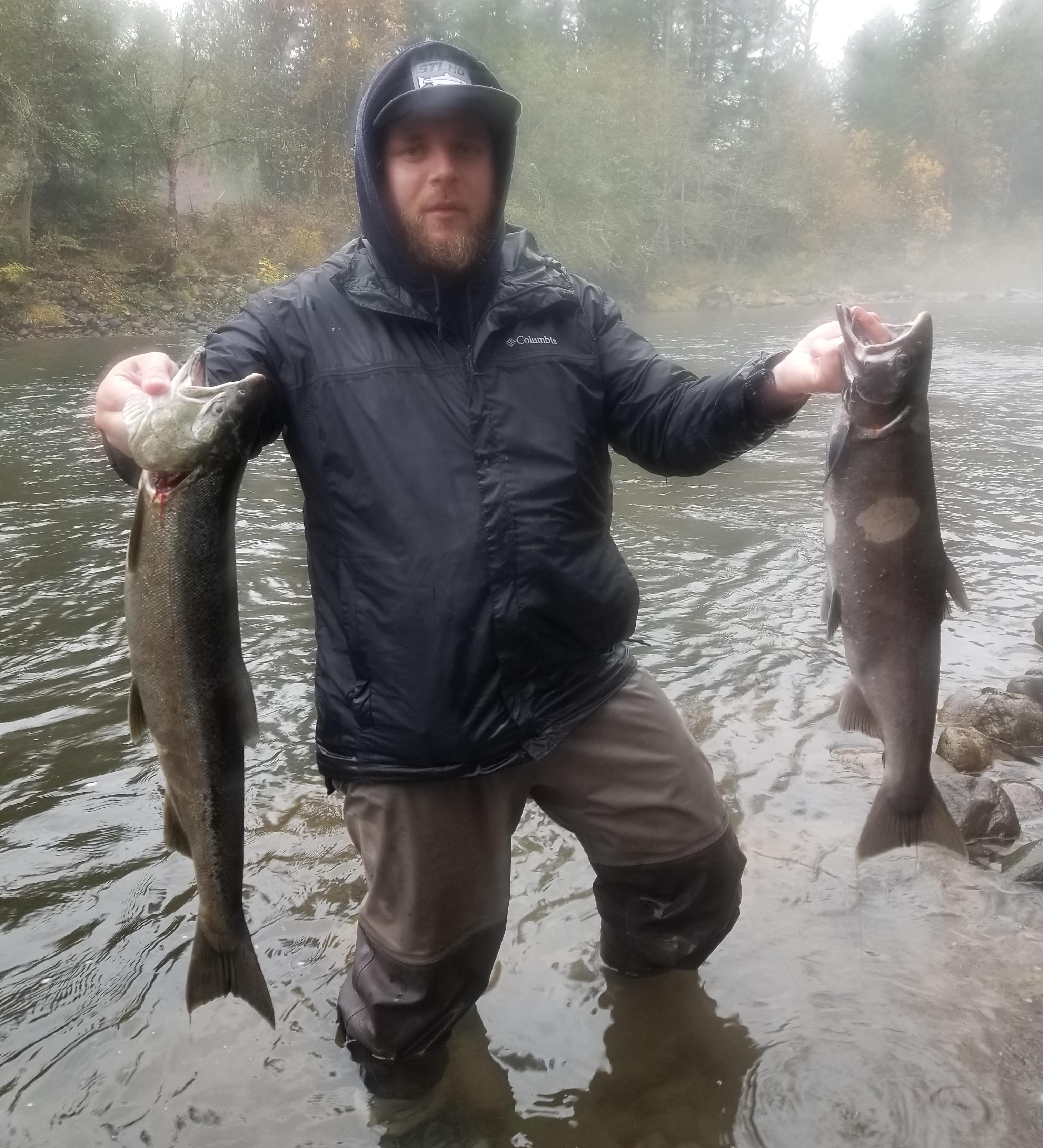 Rounding out the end of November I found a new friend request on Facebook, and he looked like a fishy dude so he got the add. It wasn’t long before he started posting pictures of big wild b-run coho just starting to show up on another river nearby. I recognized the spot he was fishing, and decided to go for my last hurrah on November 31st before my hiatus. I went down to the spot and threw out a twitching jig. On my second cast I hooked up with a small native buck. It wasn’t chrome bright, but certainly wasn’t a boot either. Unfortunately it was the only fish for the day, but still I felt it was a good enough cap on the end of my season. 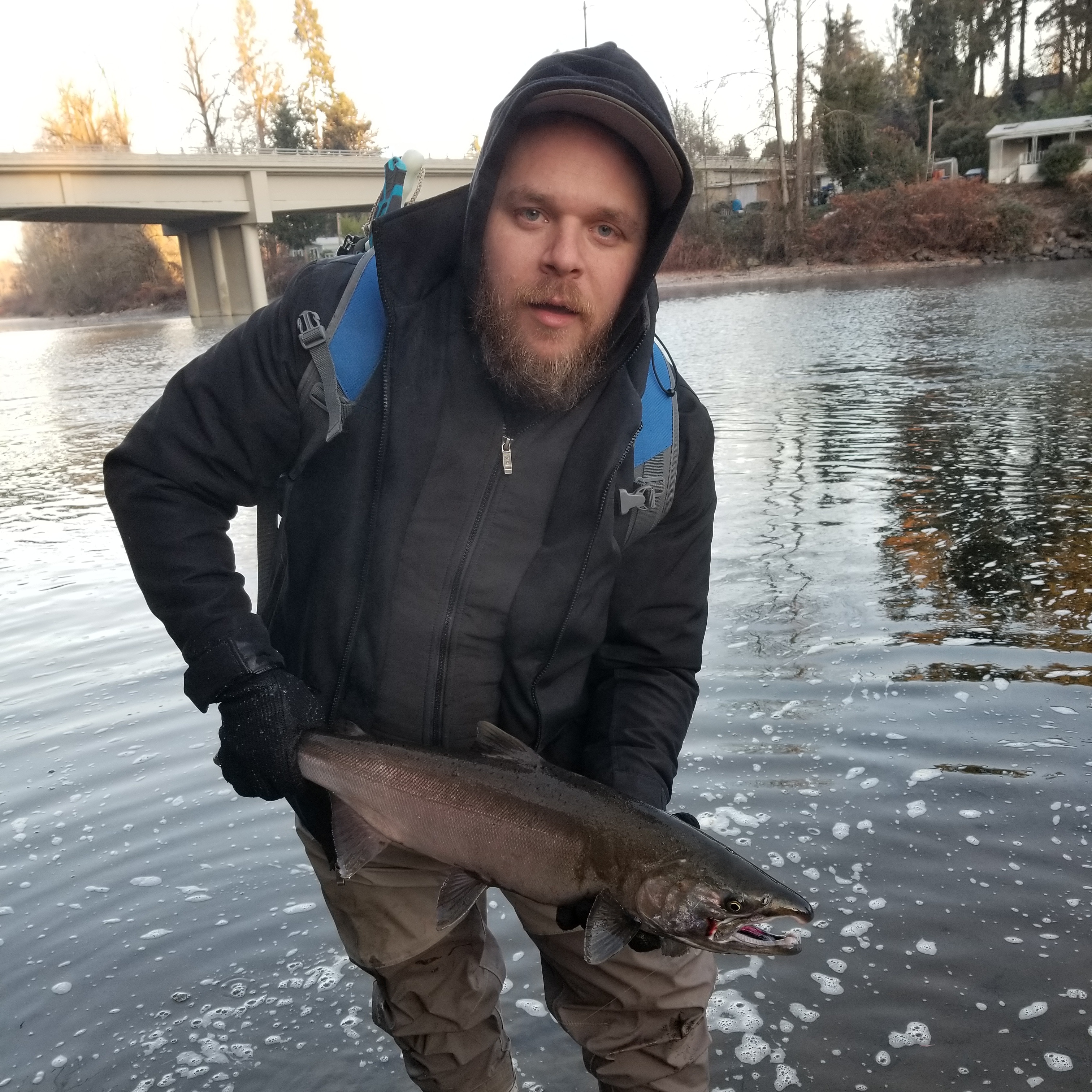 About a week into December my new friend was still having regular success shaking hands with a few native fish a day. One morning I found myself with nothing to do while my wife was at a doctor’s appointment, and work still a number of hours from beginning. I couldn’t help myself, I grabbed my gear, pulled my waders on over my work clothes, and headed for that hole. My new friend was there, and this was the first time we had actually met in person. He was more than gracious about sharing his spot, and gave me a rundown on the fishiest parts of the hole. I wasted no time finding myself a rock and letting a pink twitching jig fall to the bottom of the hole. About two twitches into my first cast I had a fish on. It was easily my biggest coho of the season, and chrome bright too. Already my decision to break my own rule about fishing in December paid off. With my next two casts came two more coho each similar in size and just as bright as the first one. It was the best start to a salmon fishing session I’d ever had, starts like that are rare even in stocker trout fishing. There was a bit of a break between number three and number four, but within an hour of arriving I had landed 4 big, beautiful, bright, silver bullets. Fishing had been phenomenal that morning, and I knew I couldn’t squander an opportunity as good as that to catch more fish. I walked up the bank to my car and called in sick to work, there was no way I was going to stop fishing for the day. 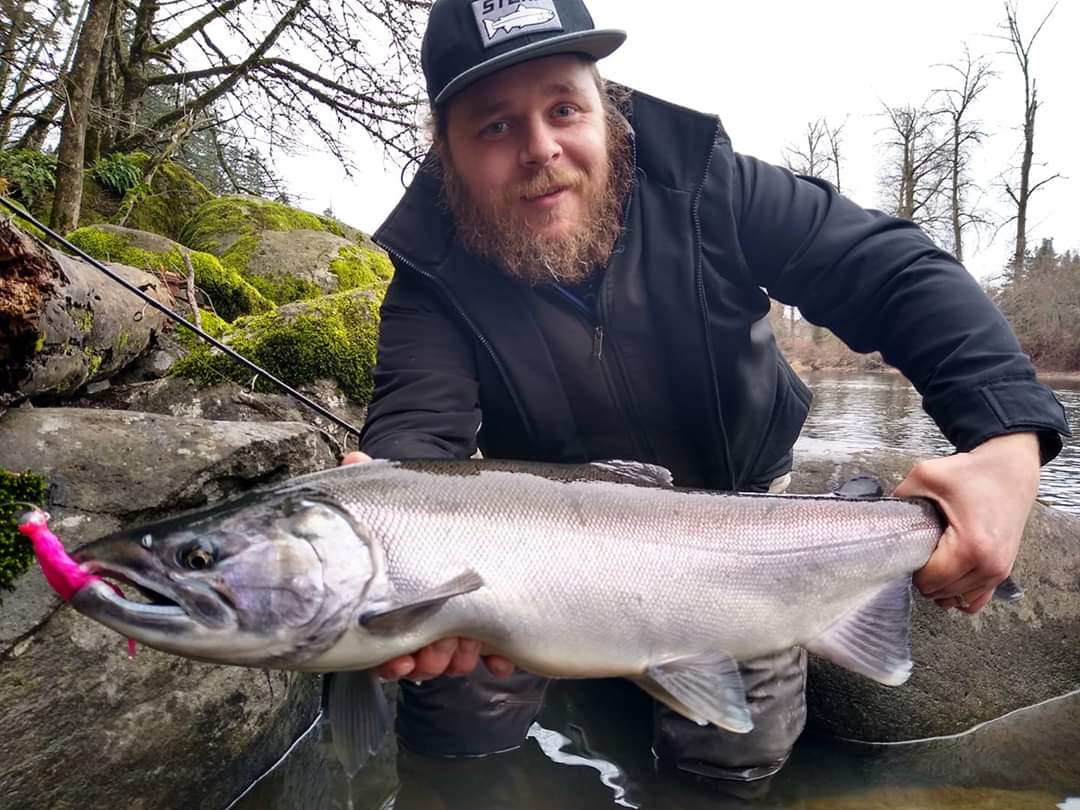 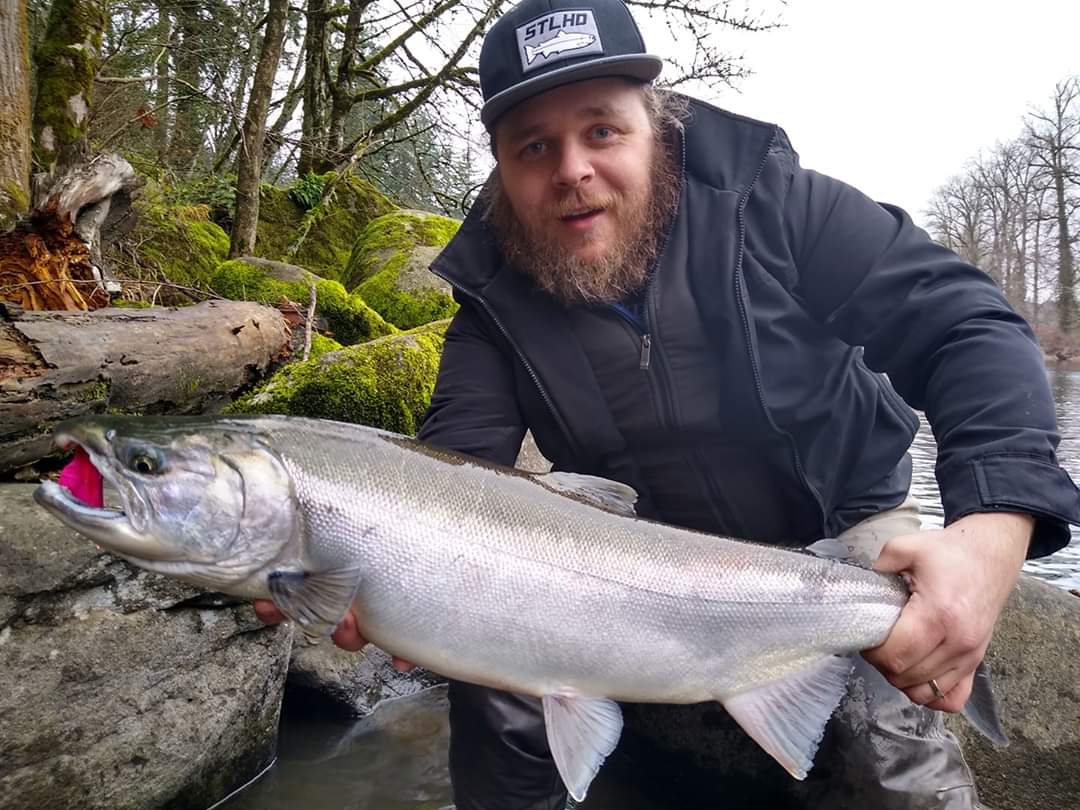 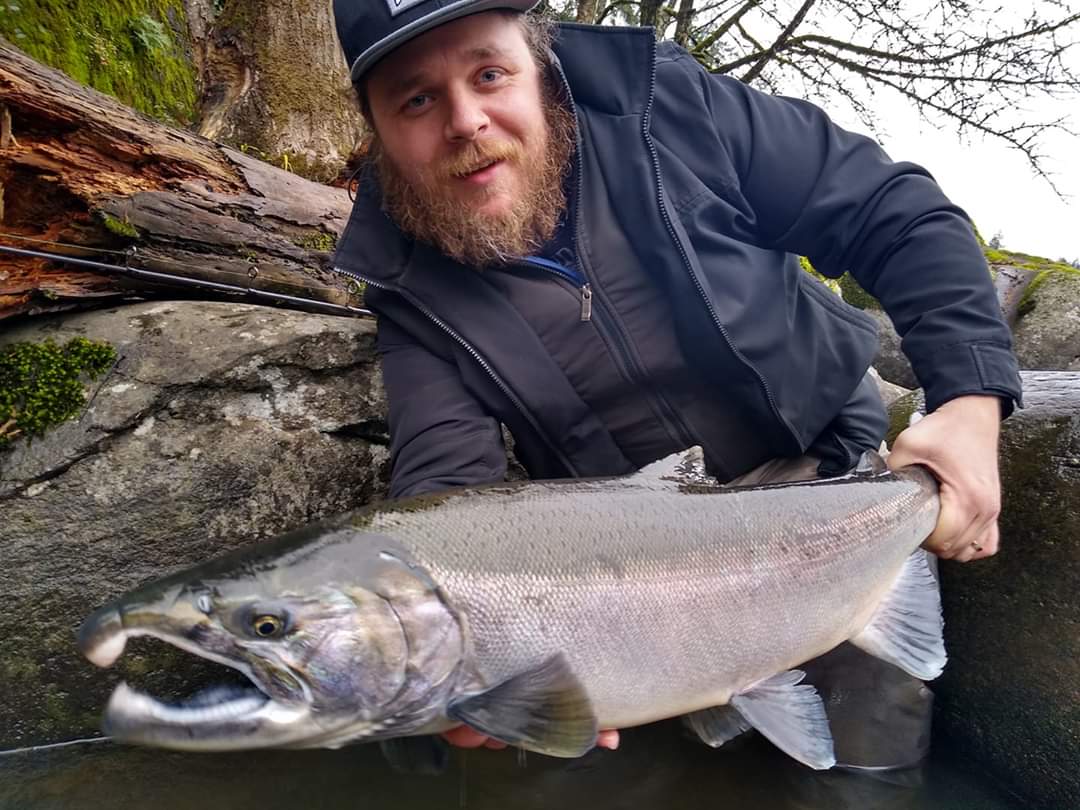 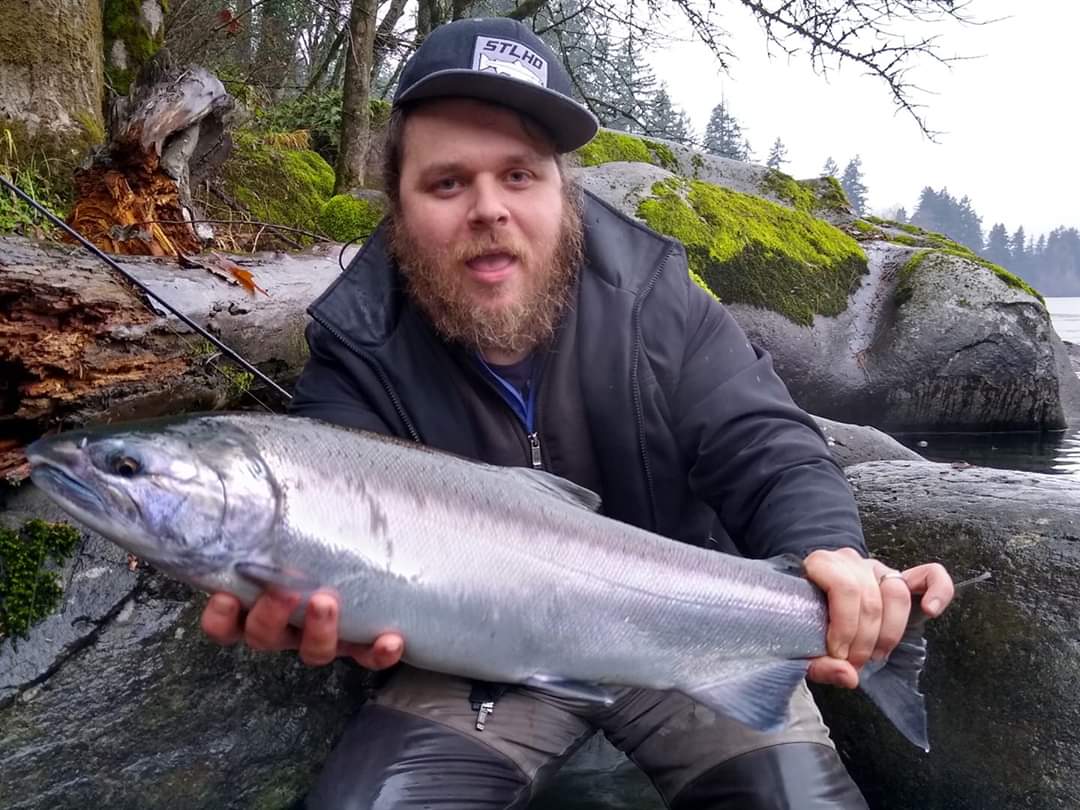 The bite slowed down quite a bit after I called in to play hooky. I finally had a grab at my jig and fought a fish for a brief few seconds before it popped off. For the remainder of the day the fish schooled through providing action that would sporadically pick up for a few minutes. I had lost all of my jigs and had switched to pink plastic squid for twitching, but the effect was the same. My tally was up to seven fish for the day when I hooked another one. This one was big. It easily peeled line off and was fighting hard. I got a glimpse of it in that water, and felt fairly confident that I had probably the biggest coho I had ever hooked on the other end of my line. It kept diving for rocks and I was fighting to keep it away. Finally it dove as hard as it could and rubbed my 30 lb braided line against a sharp rock releasing itself and letting my line go slack in an instant. It was disappointing, but this was no ordinary day. On an ordinary day a loss like that would have been devastating.

When the sun went down and the day was done my new friend and I had landed 8 coho each and collectively hooked more than 20. It was easily the best day of salmon fishing I have ever had. It was (and still is) hard to get off my mind. A couple days later I snuck out again. I bundled my daughter up, popped her in the stroller and took her down to the riverside so she could watch her dada fish. The weather was pretty bad and she was beginning to get fussy so I figured I would pack it up. Of course that is when I finally got a strike… then lost it. I wouldn’t be a true fisherman if I didn’t make time for a few more ‘last casts’ plus I felt confident I could land something there after the beatdown earlier in the week. My persistence paid off. I landed my final coho of 2019. It wasn’t a chromer like all the fish just days before, but was still a nice looking, hard fighting, big buck. It was an extra special fish as well because I got to share the experience with my daughter. She has seen me catch plenty of trout, but never a salmon. She may have been even more excited than me as she patted it’s head and we sent it off to spawn a new generation of beautiful fish. 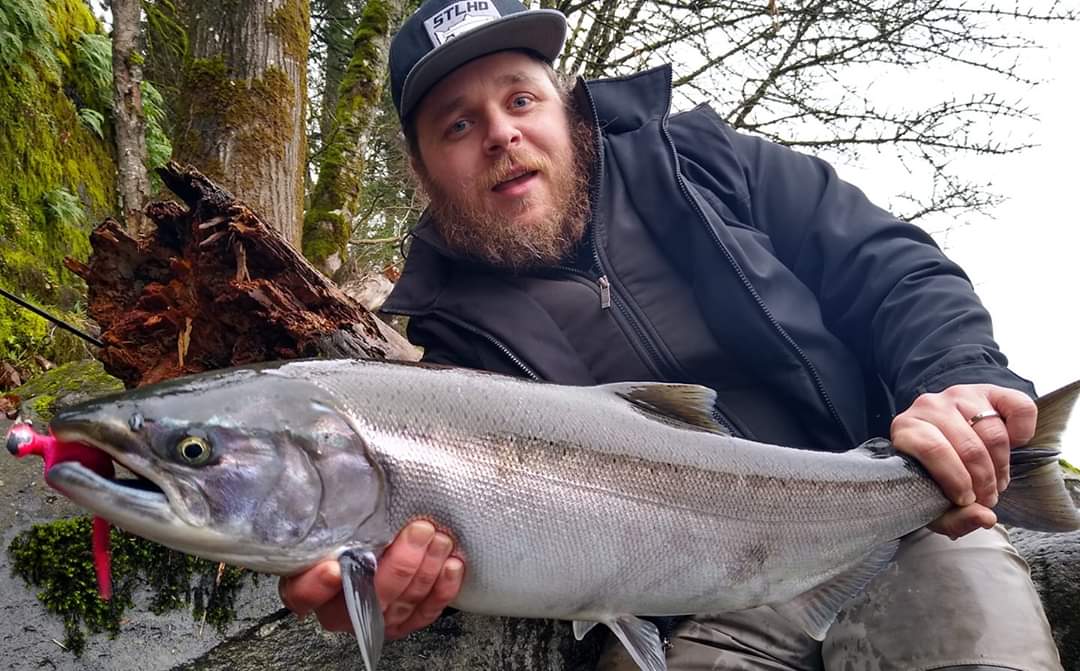 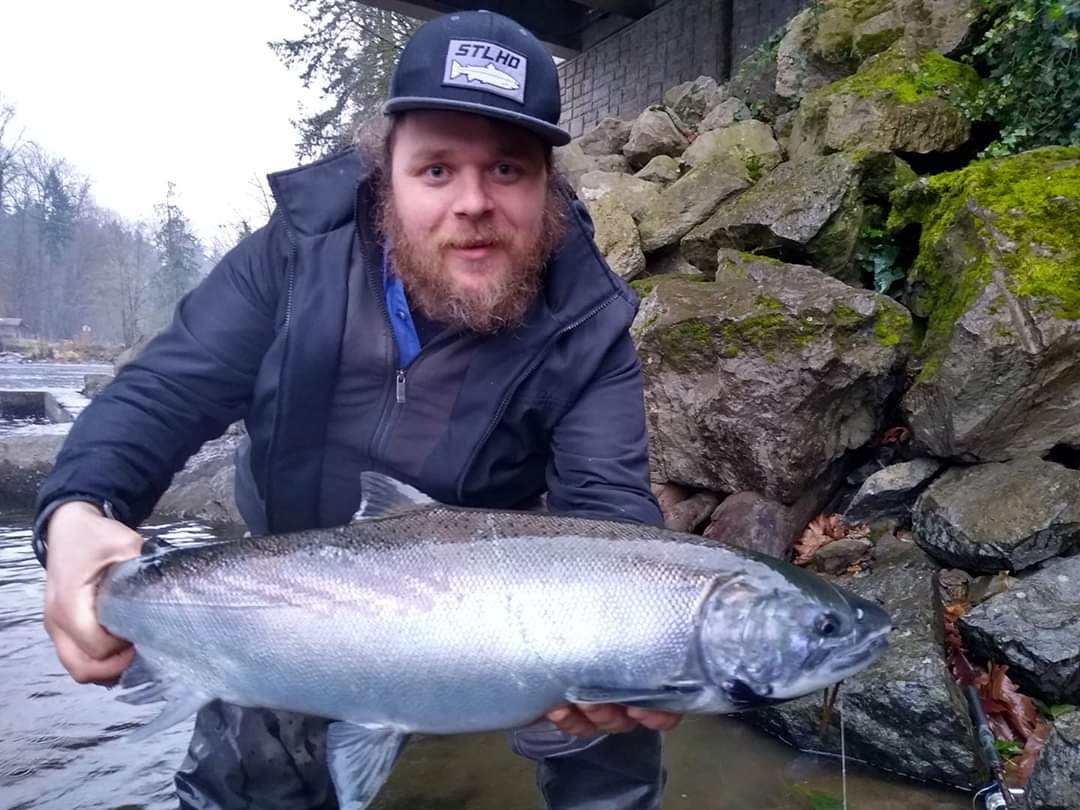 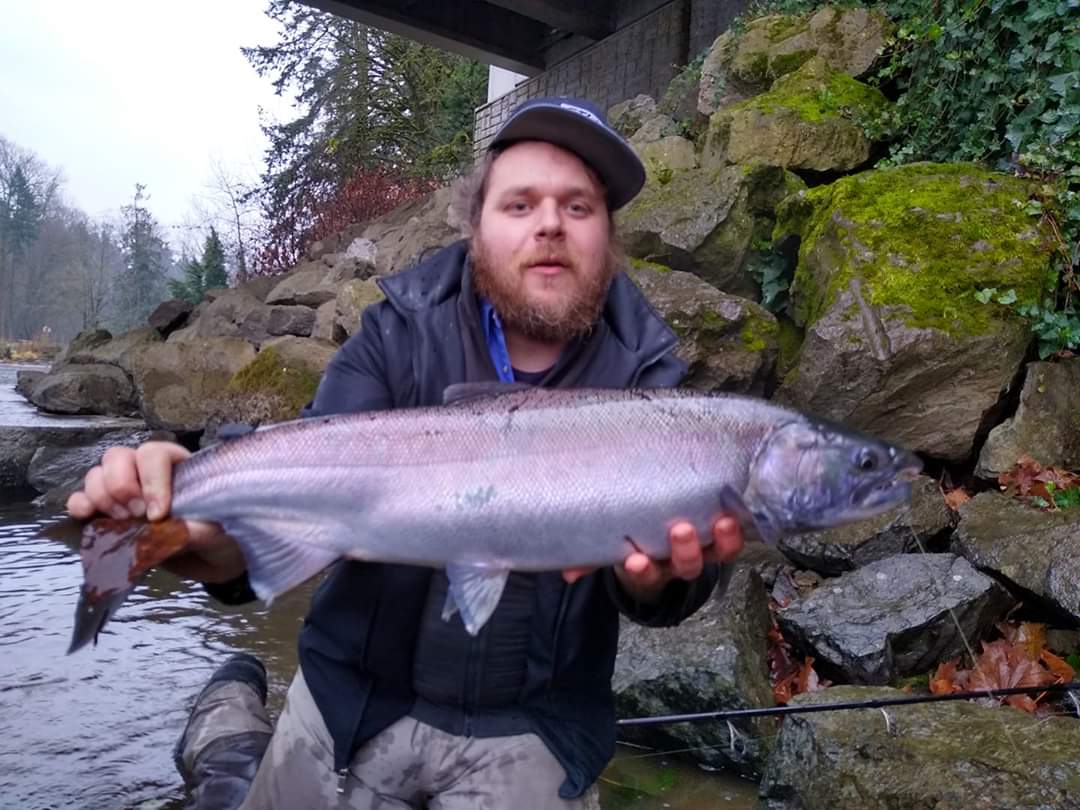 2019 was a wonderful coho year for me. I enjoyed every outing, and came away with fish or pictures on nearly every trip. I almost ended my season early with about 10 less fish under my belt, but was able to extend my season into December by putting myself out there and trying something different. I remained optimistic that there were fish to be had, I just knew I had to find them and be there at the right time. It was certainly a nice way to round out the year after an awful chinook season and a dismal steelhead year, and has me dreaming about what will happen when next year’s coho show up to play.